adhyātma-jñāna-nityatvaṁ – that is the atma, through the path of knowledge eternally controlling

jñānam -from the meaning of knowledge

ajñānaṁ -from the ignorance (not knowing)

That is the atma, through the path of knowledge eternally controlling our mentalities. The meaning of knowledge by visiting or knowing God, hence the knowledge is such that thus (or as a result) it is told or declared, from the ignorance (not knowing) whenever, develops our feelings of unjust and wrong.

The scripture of mankind.

What does it say in Gita? 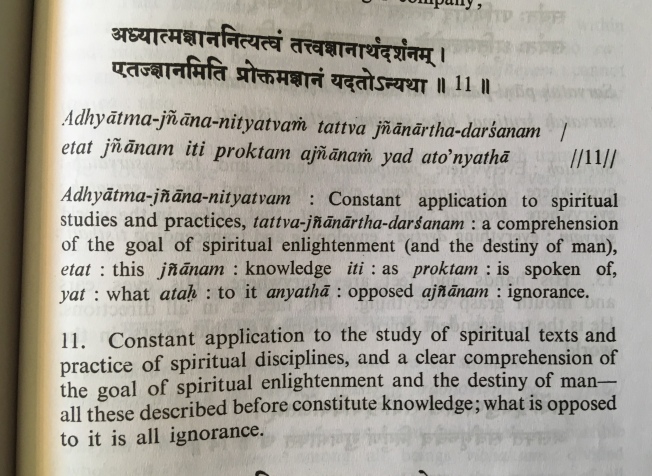 I see many things wrong here in the English translation, the word atma is not in translation or the word darsanam.  This verse is not about the goal of spiritual enlightenment that is the destiny of man. Though those are not bad words to live by. It is telling us the difference between knowledge (equal to visiting the temple or knowing) and ignorance or not knowing equal to developed feelings of unjust and wrong. If you are not interested in the real meaning in the way Sanskrit should be understood, any understanding would work. That seems to be nature of how things are also sometimes.

Wouldn’t we know this? That is what is opposed to (opposite of ) the constant application of study of scriptural  texts is the ignorance. Ideally we want this to be the truth but there is also equal truth to many other Hindu principles say yoga or science of action. What I have understood is ignorance is all around us, even with what I am seeing in text, in printed form.  This is how I see ignorance now, no wonder it is said in Hindu texts we live in ajna (or ignorance).  I want to say I know why we might be living in this world of ignorance. It is as simple as this, that is the capacities with which people of the world understand and do not understand looks like everything around us. What we are not aware of or feel someone is not aware of is the reason we develop feelings of right and wrong. This is personal and or worldly. The scripture of mankind. One of my favorite meditation verses on Gita in Sanskrit also says knowledge is like opening of one’s eyes.

What is eternally controlling is knowledge.